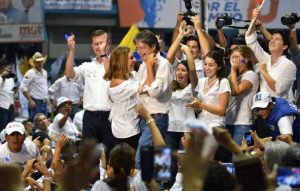 Guillermo Lasso, presidential hopeful representing the right of the country.

Thursday the candidate of the CREO-SUMA alliance, Guillermo Lasso, called for “change,” so that the Andean country does not follow the path of Venezuela, where “a coup has annulled the authority of the National Assembly.”

“We are gathered here with the people who want democracy and freedom: A democracy with independent powers, with independent justice, with an autonomous assembly, not what has just happened today in Venezuela, a coup d’etat that annulled the National Assembly,” exclaimed Lasso at the closing of his campaign in Guayaquil.

On Wednesday night, the Constitutional Chamber of the Supreme Court of Justice of Venezuela, accused by the political opposition of being at the mercy of the government of Nicolás Maduro, took over the functions of the Parliament, whose majority is made up of opposition legislators.

The decision triggered an avalanche of criticism from the international community.

“Do you want that?” Shouted the candidate, who in the case of winning the elections would return the country to the hands of the right coalition, as countries like Brazil, Argentina, and Peru recently made.

“Then let´s go for the change, for an independent justice, because change is freedom so that nobody chases you,” added Lasso, who criticized the decision of the Ecuadorian authorities not to let Lilian Tintori, wife of the jailed opposition leader Venezuelan Leopoldo López, enter the country.

The candidate, former president of the Guayaquil Bank, said that voting for the ruling party is voting for the “continuity of a dictatorship of a political party.”