Guinness record for Ecuador by siembratón 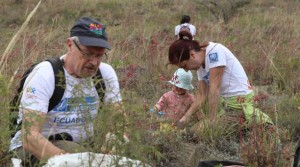 This July 30, Ecuador will receive the Guinness Record recognition for the siembratón (sowing marathin), an initiative that managed to reach the mark of most people planting native plants at multiple sites simultaneously.

The event took place on May 16, 2015 and attracted more than 44,000 trained volunteers from 198 Decentralized Autonomous Governments (GAD for its Spanish acronym), volunteers from the Civil Society, Public Institutions, Scouts, private companies and schools.

Ecuador broke the record for 179 varieties of flora, 44 000 volunteers involved and 570 000 plants sown. According to the Government, these plantations covered 2,000 hectares of land.