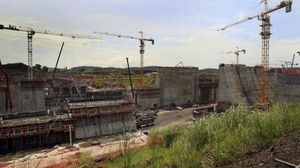 In a questionnaire answered by Paolo Moder, Member of the Board of Directors of Grupo Unidos por el Canal (GUPC), responsible for the expansion of the Panama Canal, denounces the “doublespeak” of the Panama Canal Authority (ACP), and deny that it seeks to “negotiate outside the contract” a “cost overruns” that has been estimated in more than 1 600 million dollars.

The GUPC, who leads the Spanish Sacyr and is integrated by the Italian Impregilo, Belgian Jan de Nul and the Panamanian CUSA, has appealed to a clause of the contract to announce this week that the will paralyze the extension works sinceJanuary 20 if not their  economic claims are not recognized.

The administrator of the ACP, Jorge Quijano, said that this is a measure of “pressure” to force a negotiation “outside the contract” or the alleged cost overruns which, according to the senior panamanian official, are not properly justified.

“The ACP are only paying the initial costs of the contract without reaching a fair agreement, balanced and public, to avoid, as on other occasions, that the agreed terms are not fulfilled (…) that force the ACP to maintain a contractual balance as a result of unforeseen situations, “said Moder. If the arguments of the Consortium are still not recognized and the contract is terminated, “they must find a contractor for the end of the work”

Euros and Latin American bills are produced in Spain