On Wednesday morning, Harrison Salcedo, lawyer for former vice president Jorge Glas and the dejected leader of Los Choneros, Jorge Luis Zambrano, alias Rasquiña , died in an attack against the truck in which he was traveling in an area near where his office, in the north of Quito. 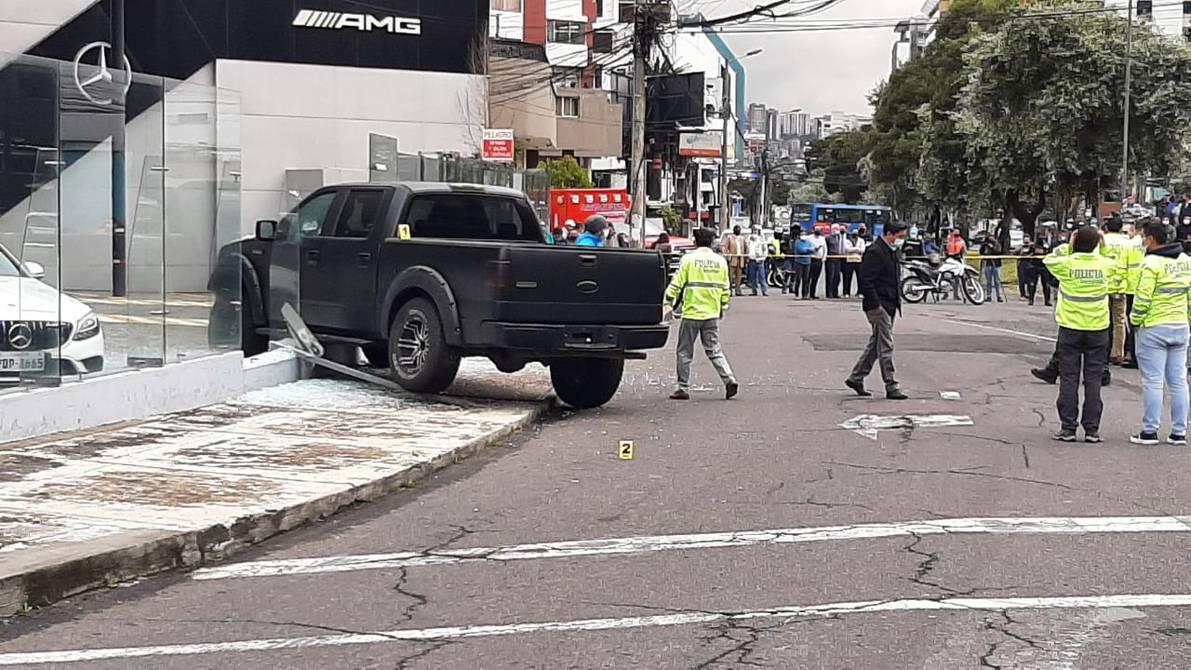 The lawyer Harrison Salcedo at the time of the attack was traveling in his truck along Seis de Diciembre and República avenues, north of Quito.

Apparently, upon receiving the shots, Salcedo lost control of the black Ford-150 pickup truck, without license plates, that he was driving and crashed into the glass fence of a car dealership. Inside the vehicle, only the lifeless body of the lawyer was found by the police authorities.

So far there have been no detainees for this incident that occurred between avenues Seis de Diciembre and República, in the north of the capital, but there is talk that the hitman-style attack took place from inside a car that did not have license plates.

Citizens who witnessed the attack indicated that there were many shots heard on Wednesday morning. From the sounds of gunshots, some spoke that a machine gun was used and others, on the other hand, said that it was an automatic pistol.

The area where the incident occurred at the time remains cordoned off by agents from various police units. Relatives of Salcedo, including Cornelia Salcedo, his sister, as well as friends and colleagues from his law firm have reached the site but have not delivered commenting on the attack.

In mid-2020, Salcedo obtained the freedom of the leader of Los Choneros and on July 6 of that year Jorge Zambrano left the Cotopaxi Rehabilitation Center . Six months later, Zambrano was shot and killed in a shopping center in the city of Manta, a fact that is still under investigation.

Salcedo, along with other people, including Zambrano himself, were being investigated in the Guayas province for the crime of illicit association, as the authorities considered that irregularities had been committed related to the release of the now downcast leader of Los Choneros, who was also known by the alias of Rasquiña or JL .

On September 2, Salcedo was linked to the prosecution for the crime of illicit association, a criminal case in which the now deceased had a hearing at precisely 09:00 on Wednesday, April 28.

Harrison Salcedo was the defense of the former Vice President of the Republic Jorge Glas in the processes for illicit association related to Odebrecht, the one followed by aggravated passive bribery called Bribes 2012-2016 and in the well-known Singue case for the crime of embezzlement. In the first two cases, Glas maintains enforceable judgments, while in the Singue case it has a judgment of first instance.

He was also a defense at the time of former assemblyman Eliseo Azuero within the criminal process for the crime of organized crime that had to do with irregularities in the construction project of the Pedernales hospital and legally represented one of the metropolitan agents of Transit of Quito who were Accused of being part of an organized crime, for which former President Abdalá Bucaram Ortiz and his son Jacobo Bucaram Pulley are also being investigated.

At the end of last March, Harrison Salcedo also participated in a hearing against five policemen for the alleged alteration of evidence in the disappearance of a plane that was under chain of custody in the Galapagos Islands.

Salcedo represented one of those prosecuted for the disappearance of the Cessna Conquest II type plane that landed at the Isabela Island airport on January 8, without the authorization of officials and with an apparently cloned license plate. The aircraft was in the chain of custody of the Judicial Police.

After Salcedo’s death, citizens in Quito requested that the authorities implement stronger measures to control “criminals” who attempt against life.

One of the people who said he heard the sounds of gunfire, and asked not to reveal his name, explained that he heard several detonations of a fast weapon between 09:10 and 09:20 this Wednesday, while he was getting ready to leave. his house, which is located in front of where the attack took place. The man consulted assured that it is not the first time that crimes like this have occurred in the area. (I)

President Lenín Moreno suffered a breakdown in his health this morning