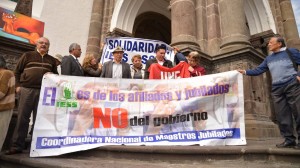 The Board of the Ecuadorian Institute of Social Security (IESS) still does not know the report 001 of April 13, 2015, prepared by a special committee of the institution along with another from the Finance Ministry, the same that has concluded that the Health debt of the State with the IESS (and that would be $ 1,800 million according to preliminary calculations) does not exist, according to the employers’ representative at the Council, Felipe Pezo, when asked about the observation the Comptroller made to the IESS on the subject.

On September 17 the Comptroller gave Richard Espinosa, president of the Board, the official letter no. 21586 in which observations are made to a letter sent last July by the general director of IESS, Camilo Torres Rites, to the inspection body of that debt.

Violence against women does not decrease in Ecuador