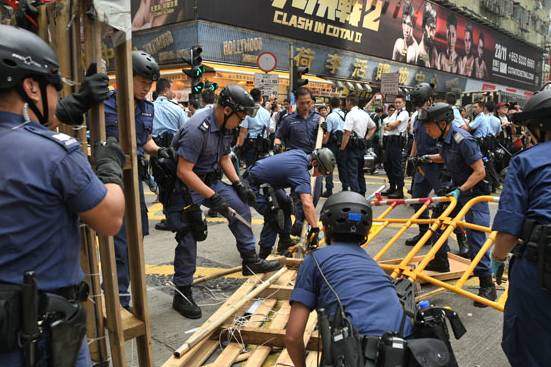 Hong Kong police evicted this Wednesday to the pro-democracy movement activists and street barricades erected by them in Mong Kok, where it also were arrested 116 people.

The police used pepper spray to disperse activists who tried to prevent the eviction of the protest camps in the busy commercial district of Mong Kok, most conflictive zone since protests begun, today 60 days ago to request a truly democratic election in the city in 2017

Among those arrested were the student leaders Lester Joshua and Wong Shum, according to the pro-democracy organizations. The reasons for his arrest are not released so far.

The police eviction was carried out following a court ruling which gave permission for the removal of barricades in the district of Mong Kok, at the request of an application from an organization of taxis which was endorsed by the High Court of Hong Kong.

Policing arrangements remain in different parts of the neighborhood on alert for the possibility that the protesters try to regroup over night, after several groups so it announced through social networks.