Horse Facheng stood out this Sunday at the racetrack 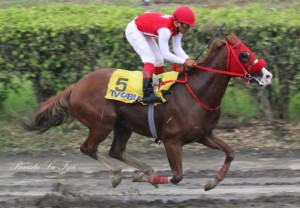 Last Sunday´s afternoon, at the Miguel Salem Dibo racetrack, in Samborondón, horses Facheng And Overbrok triumphed in the classic, a tribute to the riding pioneer of the last century, Enrique Guzman Aspiazu.

Despite the not so favorable racetrack condition because of the rains, the horse Facheng broke the record of 1,100 meters. Facheng was ridden by the Ecuadorian jockey Jofre Mora and won over Polvo de Estrellas by about a four lenghts advantage.

Facheng imposed himself with a time of 1 minute 03 seconds 4/100, with which he broke the single season record of 1,100 meters.

On the other hand, Overbrock reached the second place, being defeated by Connenctor.

Businessman Alvaro Noboa returned with these victories to the winners circle and pointed out that his dreams of great equestrian and owner are being accomplished.