The Hungarian Foreign Minister, Péter Szijjártó, arrived in Ecuador to sign two letters of intent on defense and hydrocarbons. The diplomat hopes that this will open the door to new joint actions. 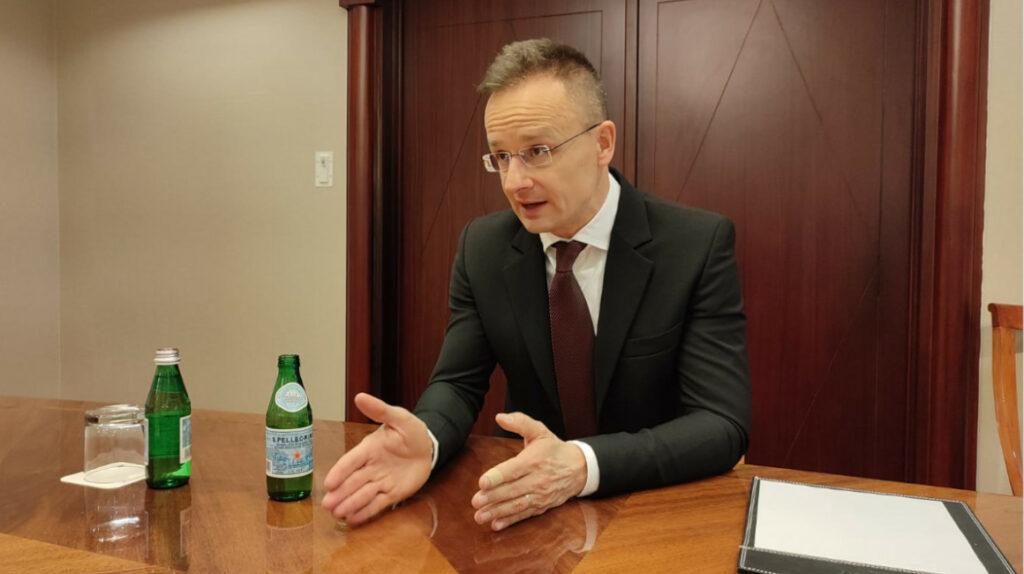 The Foreign Minister of Hungary, Péter Szijjártó, in an interview with PRIMICIAS, on January 19, 2023.

Hungary seeks to activate cooperation in defense and energy matters, especially in the oil area.

This is the second time that the diplomat has visited Quito, the first being in 2008 to reopen the Hungarian Embassy, ​​which had been closed in 1999.

In conversation with PRIMICIAS, Szijjártó explained the details of the bilateral relationship and its new possibilities:

What is the reason for this visit?

It means signing two very important agreements: one on security cooperation and the other on energy cooperation.

The world now faces challenges in the fields of citizen security and energy supply. And the countries that can work best are the ones that have the widest cooperation.

What agreements could be made with Ecuador in oil matters?

Ecuador is one of the countries with a high oil production and we understand that there is a capacity of 450,000 barrels per day, in addition to significant reserves.

Because our crude oil supply comes from Russia, we have to be prepared for any type of emergency, considering there is a war.

For example, if transportation (of oil, ndr) through Ukraine is cut off, we will have to import oil by sea, which is why we are looking for options and Ecuador is one of them.

On the other hand, we understand that for technical and political reasons, the Government decided not to open new oil fields, but there are opportunities to carry out enhanced recovery programs in Petroecuador fields that are in operation.

We have one of the best technologies in the world, called tertiary recovery (it is the practice of extracting oil from a well that has already gone through the primary and secondary recovery stages, ndr), which means that with the use of chemicals you can greatly improve oil production.

Our national oil company, MOL, has already been involved in discussions about a possible participation in enhanced recovery.

That is an option. The Hungarian oil supply comes from Russia, via Ukraine. And both the provider and the transit route have been reliable so far.

But, as the attacks have affected the electricity system in Ukraine, which moves the pipeline, there are times when the pipeline is out of service. We don’t have any problems yet, but we consider this possibility in an emergency.

It is a feasible scenario, that we take Ecuadorian oil into consideration, we want to open that door.

Regarding tertiary recovery, would the objective be to sign a contract with Petroecuador?

Yes, between Petroecuador and MOL. They have already been in contact and discussing the issue. Therefore, this time we have a meeting with the Minister of Energy, Fernando Santos, and I will ask him to help us promote the process.

Ecuador has the ITT field, the crude there is heavy and the country does not have the technology to develop these resources. Have they talked about it?

In Hungary we have a large refinery, specialized in Russian crude. It would be possible to make technological adjustments to receive other types of oil (heavier, ndr).

How much could Hungary invest in Ecuador for tertiary recovery?

MOL places great emphasis on innovations from the chemical industry. They have a large plant in Hungary, where these innovations are made, and they could easily take part in any project in Ecuador and bring the technology without any problem.

On the defense issue, what does the letter of intent that both countries will sign imply?

The most important pillar is efforts to maintain peace. Security is a global issue, if one part of the world is insecure, the other parts may not feel safe.

If there are security risks, violent actions or conflicts, they usually end up in a global phenomenon: illegal migratory flows.

Our goal is to have a common presence in most of the world, with international missions. And the experiences and knowledge we get there should be shared. We now have between 1,000 and 1,200 troops deployed on missions on three continents.

The priority is to help improve global security and prevent unpleasant and unwanted illegal migration flows.

The second thing is to deploy the defense industry in our country and improve the capacity of our national defense forces.

That is why we would like to carry out joint projects in this field. And it is not an illusion, recently we began to buy equipment from Latin America, for example, aircraft from the Brazilian company Embraer.

Is there something that Ecuador can offer you in the matter?

This agreement is the basis for starting any type of negotiation on any type of equipment and will be taken into consideration for the modernization of our defense forces. But it is something that we must explore, although we are open.

Does this involve sharing information and experiences?

Being part of the peacekeeping effort is not easy, because it is not done in the most peaceful parts of the world, which is why international missions are required. We have experience in counterterrorism missions, for example, against Isis in Iraq.

We have also been part of peace missions in the Sahara, Lebanon, Cyprus, the Balkans, Kosovo, Bosnia. There we have been able to collect various experiences.

Our military high command will meet to discuss the experiences of both countries and decide which ones are useful for each.

Precisely, in Ecuador there have been problems with the Albanian mafia, and with the experience of Hungary, could there be collaboration to face this type of threat?

Obviously, because we face similar challenges in Hungary.

These problems of ours come with illegal migration, because we are located on the busiest land route for migration. Just last year we stopped 260,000 illegal migrants.

And there are many organized crime gangs that are smuggling migrants. Now his behavior entered a new, more violent dimension.

These Eastern European and Middle Eastern gangs must be stopped. We have to screw up their business model.

And we are in an intense conflict with Brussels and the European Commission, because we represent a strict immigration policy. We see illegal migration (from Southeast Asia and the Middle East) as a security threat.

The reason is that illegal migration is feeding criminal gangs in the Balkans.

Could this initial cooperation be the door to open other lines of work, for example, with the Police or the General Prosecutor’s Office?

Absolutely, to share information, because it can be very useful to know what gangs are operating here and there and what kind of transactions or information they are moving between them, and how to cut them off and stop them.

We believe that Ecuador has done a lot to deal with the problem of drug trafficking, which is why, from Hungary, we strongly support the proposal that Ecuadorians can enter Europe without a visa.

On another issue, last April, after the start of the Russian invasion of Ukraine, Hungary offered to receive displaced Ecuadorian students at its universities. Has there been progress in that regard?

Now there are around 200 Ecuadorians studying in Hungary, in higher education institutions. Part of them with scholarships from the Hungarian government. Every year we give full scholarships to 75 Ecuadorians.

This year there were 227 applications and that shows that there is an interest among Ecuadorian students to travel to Hungary.

In addition, we have a program for students at risk, which is aimed precisely at those who had to cut their studies in Ukraine due to the security situation.

Between both programs there are 175 Ecuadorians studying in Hungarian universities.

The CFN will auction the La Clementina farm in 2023