With the death of another wounded during the industrial disaster, the rate grows to nine deceased due 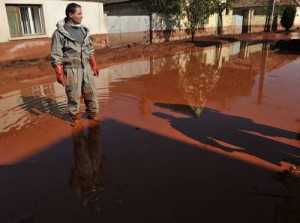 to the toxic wastes that swept over 40 square kilometers in southwest Hungary.

Civic Protection informed today that it was an old person who lived in Kolontár, a town were the toxic wave hit really hard. The death occurred this morning in a hospital of Ajka were he was being treated for serious wounds.

The contaminating flood left over 150 injured, 50 people are still hospitalized because of burns and blunt traumas caused by the violent wave. Most of the deceased were residents of Kolontár, the red mud dragged some of the bodies for five kilometers. Meanwhile the authorities continue with the cleaning labors of Kolontár and Devecser, the most affected towns.

Today is expected that the reinforcement of the dam be finished, since it has been four days of construction. The objective of the dam is to divert any possible spill in case the tank breaks totally. The population of Kolontár is scheduled to return to their homes during Saturday