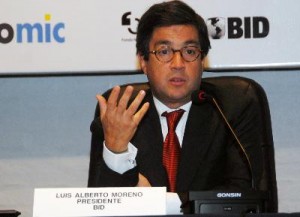 In an interview, Luis Alberto Moreno, president of the Inter American Development Bank, indicated that the organization established a special fund of 2,000 million to finance small businesses, public-private partnerships and infrastructure projects in Latin America starting next year.

IDB plans to allocate 13,000 million to various development projects in sectors such as trade, integration and environment in the region, similar to the figure budgeted in 2014.

“We will allocate 2,000 million dollars to the private sector, but this will start in 2016,” Moreno said during a meeting of leaders of the Pacific Alliance formed by Mexico, Colombia, Chile and Peru.