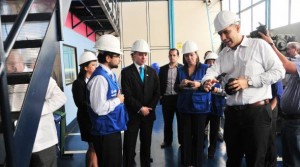 The Direction of Labor Risks of IESS audited two companies yesterday, Diario Expreso in the north of the city and the Guayaquil Clinic in the center of the city.

Diario Expreso was visited in less than a day from the transmission of a nationwide television address of the government which accuses it of lying in a newspaper article about the IESS.

The nationwide television address with the title “Diario Expreso lies about IESS payments to private clinics,” criticized the article “IESS ceases to give advance payments to the clinics,” published on May 9.

However, according to the authorities the visit was unrelated to the video that the Secretary of Communications ordered.

The National Director of Risk Luis Vazquez, said that the visit sought to verify compliance with the policy on risk prevention and health. “The spirit is not punitive,” he said, explaining that such companies were the first in Guayaquil for having achieved the best “performance scores”.

He explained that Expreso scored 91% and the Guayaquil Clinic 46%, during the self-audit phase that the social insurance enabled on its website between last March and June.

The Director of IESS in Guayas, Ivan Espinel said that such audits will be conducted in 1,417 companies in the country, between private and public.