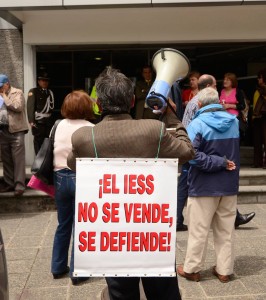 Retiree organizations have been reactivated to protest against the Organic Law for Labor Justice, which is in force since April 20. Two groups filed lawsuits of unconstitutionality before the Constitutional Court against the standard that amended several points of the Social Security Act, such as the elimination of the 40% contribution from the Government.

One group is formed by two organizations and thirteen retirees, and the other by a group that represents 50 guilds. On the one hand, the Retirees Association of Former IESS Employees organizes demonstrations outside the IESS and the CC, in Quito, which will be repeated every week until they get a favorable response from the court.

While the other demand was filed by the IESS Defense Committee, which has the support of the 50 guilds that integrate it. According to Edison Lima, spokesman and leader of the Association for the Dignity of Former Employees, Pensioners and Seniors of the IESS, no demonstrations are expected because they believe that the right thing is to follow the proceedings in court.

The Defense Front of IESS Pensioners of Guayas analyzes the content of the standard with its partners. According to a bulletin of the Defense Front for the Social Security of Ibarra, in existence since last April, lectures were given and the assembly members from Imbabura who voted in favor of the law were declared “personae non gratae.” Five years ago pensioners protested for the increase in pensions.