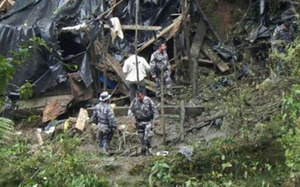 Yesterday the raid on the illegal mining left nine soldiers injured, four of them in critical condition. This action was done in Morona Santiago by soldiers and officers of the Agency for Regulation and Control of Mining (Arcom) and the Ministry of Environment.

The details of the operation were revealed last night through a television broadcast where the security coordinator, Homero Arellano and Interior Minister Jose Serrano, along with the Defense deputy, Carlos Larrea said that the incident occurred during yesterday afternoon, Thursday November 7, when two boats, which were on the river Zamora, with Arcom military officials were “under fire” as Larrea said.

Presumably one person died in the attack, but officials did not confirmed it. However, the governor of Morona Santiago, Rodrigo Lopez, assured that a person was killed.