Foreign smugglers move without worrying about the authority’s control. Violent attacks persist in the state of Tamaulipas, Mexico.

From the border of Peten, Guatemala, the undocumented that want to get to the United States; tangle themselves with foreign smugglers along the path of the Gulf of Mexico to the northern border.

The undocumented summit themselves to risky conditions and humiliations by foreign groups that infiltrate in Mexico illegally. These travelers are transported by trains, loading trucks, buses and even boats. However the complicity and connivance of federal, state and local authorities allow the growth for the illegal human traffic industry. The immigrants face a situation of terror that involves executions, rapes and extortion by the hand of human traffickers. A study has been made by a NGO that advocates for immigrants.

Fray Blas Alvarado Jiménez Director of the Immigrant House of Tenosique and Efraín Rodríguez León, human rights legal Director of Tabasco; maintain that the Federal Government hasn´t fulfilled its task on dismantling and arrest these criminal groups. Those that now have taken the kidnapping of undocumented as a modus vivendi.

The traffic of undocumented in the path of the Gulf of Mexico starts from El Naranjo, Peten, Guatemala crossing over the border municipalities of Balancanes, Tenosique, Tabasco, Candelaria and Campeche. It is from these places that the immigrants are distributed into los roads, train routes and stretches of sea.

Through the years independent groups associated to international traffic of humans perform this task with less risk. At the beginning of this decade the organized crime, mainly the cartel “Los Zetas” assumed total control of this activity. The undocumented faced new hazards after this since the organized delinquents recruit some of them as new members for their group. 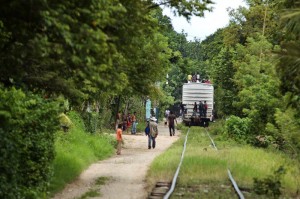 horrible. The train route is considered a lawless land for many kilometers because criminals rule them. Immigrants face a terrible ordeal while crossing railroads, pastures and mountains. The authorities aren´t capable to put an end to it.

All of the victim’s family members arrive to the chancellery in despair asking about other people who have lost communication with immigrant relatives. The Honduran government sent Vice Chancellor Alden Rivera to coordinate the identification and repatriation of the deceased.

On august 22 immigrants that traveled in a truck to the United States border where intercepted by members of “Los Zetas”. Afterwards they undocumented were blindfolded and taken to a ranch for execution, so says the only survivor of Ecuadorian nationality.