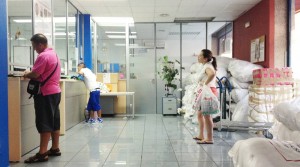 Immigrants are optimistic about the decision of President Rafael Correa of postponing for one month the entry into force of the $ 42 tax for imports under the 4×4 system.

Correa explained that the decision to delay its effect until October 8 was taken because of the need to find a way for migrants to be unaffected.

Aida Quinatoa, President of the National Coordinator of Ecuadorians in Spain, said: “When they come (referring to members of the Government) to Spain, they boast that their measures seek to favor migrants, but they contradict themselves with taxes like these that go directly against us”.

It is currently being evaluated that in order to identify migrants, they have to present the consular registration or electoral certificate of registration abroad”.

Meanwhile, in New York, migrant organizations expect to hold a meeting tomorrow with the aim of analyzing the proposal of the new rate.