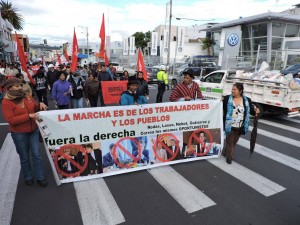 Dozens of protesters traveled from the avenues “Cevallos y Unidad Nacional”, through the center of the city, where they shouted against the Government asking for more attention to requirements such as health.

Bolivar Lopez, from the Medical College of Tungurahua, said that the lack of economic resources is delaying payments in the health sector, similar to what is happening to SOLCA.

Tito Carrillo, president of the National Union of Educators (UNE) , said that labor reforms passed in the Assembly are “lack of attention that is made against the different social sectors of the country” and that it motivates the mobilizations. (I)