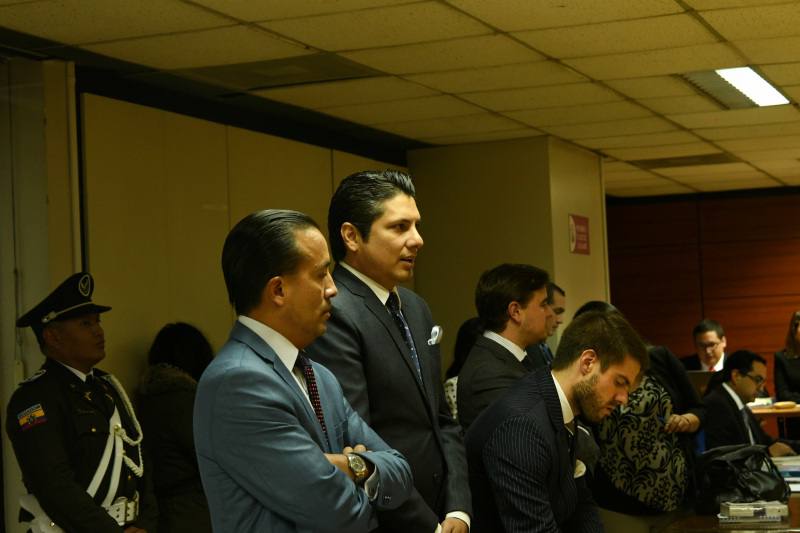 The kidnapping of Fernando Balda in Bogotá, on August 13, 2012, lasted less than an hour, according to testimony collected by the Colombian justice system, and three years later, he sentenced five people. Despite this process in Colombia and the denunciations before the Ecuadorian Prosecutor’s Office, then in charge of Galo Chiriboga, the case went unnoticed in Quito until January of this year it was reopened by the prosecutor Carlos Baca.

Balda from the beginning insisted that the intellectual authorship belonged to the president of that time, Rafael Correa.

In 2006 Balda was part of Alianza PAIS. After disagreements he went to Patriotic Society and then made his way in the most radical opposition to the band. That earned him a trial for insults and he fled to Colombia.

Since his residency in Bogotá, since 2010, he began to make contacts with right-wing Colombian politicians, close to Álvaro Uribe, and maintained his relationship with opponents to Correa. Since then the Secretariat of Intelligence (Senain) decided to follow in his footsteps. And, according to the documents and versions of the process, that task was entrusted to the police agent Raúl Chicaiza.

In his statement to the Prosecutor’s Office, Chicaiza admitted that he infiltrated Balda’s circle. On May 9, 2012, at a convention organized by Uribe supporters in Medellín, he passed himself off as a representative of a nongovernmental organization and owner of a security company. They presented, talked and engaged in a relationship of alleged political coincidences and eventual business. He showed interest in electronic espionage equipment offered by Balda. They had conversations until the day of the kidnapping.

At the same time, the agent needed money. According to the reports of the Senain and versions in the Office of the Prosecutor, of the account of the Directorate General of Intelligence of the Police, on June 7, two checks were written for the operations in Colombia for $ 10,000 and $ 11,280.

On August 13, the two visited a potential client in Bogotá. After saying goodbye, around 8:30 pm, Balda was intercepted by his captors, who forced him into a jeep.

According to Balda, when seeing the struggle, some taxi drivers called the police and an operative was set up. There was a chase of minutes and the captors threw Balda in the way. The policemen had almost cornered the vehicle that was diverted by the brush. All were arrested.

In Ecuador, the news passed as an anecdote with the happy ending of an opposition politician. Neither the Government nor the Office of the Prosecutor did anything about it.

However, Chicaiza feared for his integrity and his mission partners. The process against the kidnappers in Colombia could involve him as the intellectual author of the plagiarism and began to seek guarantees with Ministers and with Correa himself.

According to his confession, at first they offered him protection, but then they did not answer his audience requests. That led him to write four letters to the president in 2015, in which he insists on the urgency of resolving his situation before the issue explodes and involves more people. He had no answer.

The Senain, which included the name of Chicaiza in several of its reports before the Comptroller’s Office and ordered the payment of the two checks in June 2012, did not respond either.

Three years passed and Carlos Baca called Balda (January 2018) to recognize his signature on the complaint he had put years ago. And the preliminary investigation phase was opened.

On March 17 of this year, Raúl Chicaiza, Diana Falcón and Jorge Espinoza were arrested on charges of conspiracy and plagiarism. The next day the tax instruction was opened.

In May, the Office of the Prosecutor -and with Paúl Pérez at the front- resolved to link former Police Commander Fausto Tamayo (who is already under arrest for the case of police passes) and former Senain Secretary Pablo Romero.

On June 18, Correa was linked to 13 elements of conviction; among which several versions are counted – like the one of the also former head of the Senain Rommy Vallejo – who maintain that the former president knew and arranged a follow-up to Balda. For the Public Prosecutor’s Office, the money from the checks also proves the participation of entities that were under the orders of the former president.

Chicaiza and Falcón accepted the effective cooperation, which is the denunciation of the illicit ones in exchange for the reduction of the sentence. Espinoza and Tamayo fight to be declared innocent; Romero says he did not know of any operation against Balda and Correa says he is politically persecuted and swears that he never learned about the case or received the letters from the agent sent from Bogotá.

Now he has a court order to appear every 15 days in the National Court from July 2. His former head of intelligence, who lives in Spain, has an arrest warrant and an extradition process against him. Correa does not rule out asking for political asylum in Belgium; Romero already did it to Spain. Cards according to the process in Ecuador. Claim for lack of help. Letter dated September 23, 2015 signed by the intelligence agent Raúl Chicaiza.

In the core, it reports on the criminal process that takes place in Colombia and requests that the steps be taken to solve the problem. In the document, the agent complains because nothing has been done in a case in which he was involved in carrying out superior orders.

November 10, 2015 letter signed by the intelligence agent Raúl Chicaiza. He expresses his loyalty to the president, thanks the political and institutional support and says: “Mr. President, the logical question is that if the activities that were carried out on the citizen Fernando Balda in Colombia were not intelligence or counterintelligence nor for internal protection and the maintenance of public order and national defense, why they were authorized, ordered, financed and controlled by State institutions “.

He insists that he be helped in the process in Colombia.

Claim from another agent October 12, 2015 letter signed by the intelligence agent Diana Falcón. Addressing the “constitutional president,” he points out that intelligence organizations work in a “compartmentalized” manner; that is, that its members do not know the activities of others. In this case, he says, he was asked to verify the physical integrity of Raúl Chicaiza and verify that the reports are consistent with the facts.

Claims that he is unfairly involved in an issue managed institutionally and that nothing is done to fix his situation. “Government Operation” Letter of December 15, 2015 signed by the intelligence agent Raúl Chicaiza. He claims that the then president of Ecuador ordered his high-level officials to pay attention to his case that could involve him directly, because it was a government operation and nothing has been done.

Request of a solution Letter of December 29, 2015 subscribed by the intelligence agent Raúl Chicaiza. He asks for an answer to this problem known by the State “for the sake of peace and harmony” of the country, for which, he says, “we come before you.” (I)