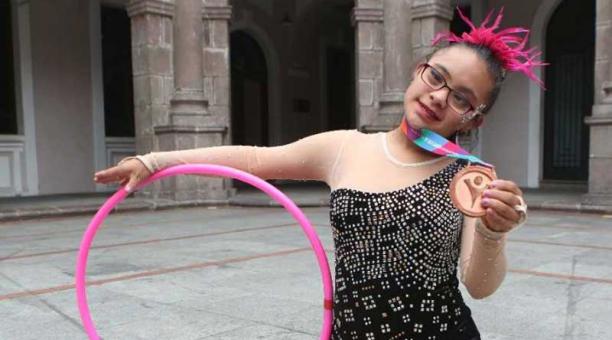 ‘My mission, as a leader athlete, will motivate the kids. Achieve an integration of all and tell them that everything is possible, “said Darío Tapia. Yesterday, he presented part of the athletes who will participate in the XX Special Olympics National Games, which will be held from June 8 to 13.

The national competition, the most important for people with disabilities, will bring together 1,000 athletes, coaches and managers. “Everyone wants to come to Quito. My first Games were two years ago, in Santo Domingo de los Tsáchilas, there I played basketball, this time I will participate as a motivator, “added Darío, who was born with an intellectual disability that has not diminished his love for life.

He receives lessons in vocalization and expression before the public, and yesterday was one of the speakers in the presentation of the National Games, which also included the mayor of Quito, Mauricio Rodas, and the president of the Special Olympics Foundation Ecuador, Héctor Cueva .

“Every two years we organize these Games. Managers from other countries are coming to watch the development of our event and receive information on how to do it, “said Cueva.

21 provincial teams will be in the National Games; we will compete in gymnastics, swimming, weights, athletics, tennis, cycling and “for the first time we will have a women’s soccer tournament. In recent years, this discipline has been played in the provinces, “said Esteban Navarrete, technical director of Special Olympics.

Women’s soccer will be played under the Unified modality. “This means that the team is satisfied with athletes with and without disabilities, thus achieving true inclusion. In Quito we have already made three tournaments with total success, “said Navarrete.

The athletes will stay at the Eloy Alfaro Military School in Parcayacu, an institution that will also lend its sports facilities for the development of the tournaments.

After the Games, the Ecuadorian team will be nominated for the World Games that will be played in Abu Dhabi. “Our coaches should be very attentive to the results and the appearance of new talents. We are going to take 36 athletes to the World Games, “added Cueva.

The mayor of Quito, Mauricio Rodas, stressed that the Municipality is the main sponsor, “we want that, during those six days, the Quito people get infected with this spirit, and that they go to Parcayacu to support these young people”. One of the athletes who will be in action is the cyclist David Arellano.

I live in Cayambe, there I trained with Byron Guamá, we went out to Olmedo. I was already in a Tour of Ecuador and in Los Angeles, in the World Games. I won three medals, they are very big and heavy, “he explained with great happiness and transparency.

With his smile, which never disappears from his face, he said that as a child he liked judo very much, “but then I liked cycling. At the beginning I fell of the bike, but only to learn. ”

He enjoyed looking at Richard Carapaz during his participation in the Giro d’Italia, “you can tell that he likes what he is doing a lot, there are strong cyclists there.” He trains every day because he wants to see himself again on the podium with his medal. (I)