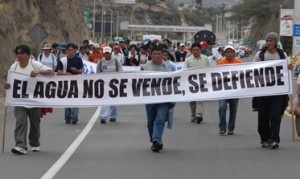 The indigenous community disagree with the whole content of the Water Law draft. The Food Sovereignty Committee of the Assembly sent a pre-legislative query to the President of the Assembly, Gabriela Rivadeneira from the Alianza PAÍS (AP) party.

The draft law was voted last Tuesday at the Food Sovereignty Committee of the Assembly, achieving eight votes in favour of AP and one against by César Umaginga (from Pachakutik). Rivadeneira shall include the project in an upcoming plenary session.

After the voting, Umaginga indicated there are five points “non-negotiable” from the perspective of peoples and nationalities: thesingle water authority (AUA for its spanish acronym), de-privatization and decentralization of water, the nonuse of water for extrativism, preservation of community management and the creation of the National Water Fund..