Indigenous Ecuadorian team will participate in the Copa America in Chile 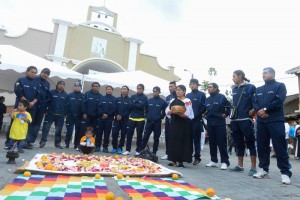 The indigenous Tri consists of 18 players (12 from Otavalo, one from Puruhá and 5 from Cayambi). They will represent the country in the first Copa America of Indigenous Peoples in Chile.

They have two months training in Peguche, but the lack of financial support from the authorities so several players from other provinces and indigenous nationalities live in Peguche during the training has prevented a greater representation of cultures, explains Mauricio Bolaños, the technical director.

The indigenous tri received a farewell and purification ceremony before going to Chile. In a circle, the players, wearing the blue uniform with the logo of the selection, aspired the rosewood scent and extended their hands to receive the fruits lying in a large white blanket on the floor (pampamesa).

Their heads were sprayed with water (indigenous supreme deity) and read and pink rose petals. “Yupaychany. Let them go and come back with good,” repeated the woman who performed the ritual, while applauding Otavalans applauded and made toasts with chicha.

The Americas Cup of Indigenous Peoples will be held from 16 to 25 July in Chile.