Indigenous march came out from Tundayme 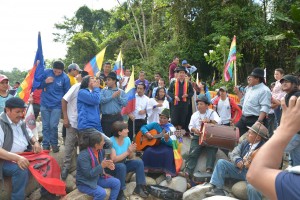 Yesterday, the march of the indigenous movements and social organizations, came out from Tundayme, Zamora Chinchipe, the same that expects to reach Quito on August 13th to join the national strike against the government.

At 08:00, with flags, food baskets and musical instruments, indigenous and trade unionists descended to the Quimi river, in the San Marcos de Tundayme neighborhood, to perform an ancient ceremony.

Canes of leadership were given to Carlos Perez Guartambel, president of Ecuarunari; Romulus Acacho, vice president of Conaie; Pablo Serrano, president of the Unitary Workers Front (FUT for its Spanish acronym); and Salvador Quishpe, prefect of Zamora Chinchipe.

They chose Tundayme by being in the Cordillera del Condor, where the Mirador mining project is developed by the Chinese company Ecuacorriente SA (ECSA), something that is criticized by activists.

At the ceremony a popular mandate of seven points was delivered to the indigenous leaders, in which the file of the constitutional amendments are required, as the restitution of the 40% contribution to retirement pensions, free access to higher education and bilingual- intercultural education, respect for the Yasuni and the rights of nature, the repeal of laws and decrees that restrict freedoms and rights and the restructuring of the Council of Citizen Participation.

Luis Sanchez, president of the communities of the Cordillera del Condor Mirador said that his people will be affected by the entry of large mining into the territory. “Currently 19 families are at risk of eviction, including Shuars and kichwas.”

SENAIN shall appear before the commission of the Assembly