Indigenous march of 12 days against the Water Law concludes 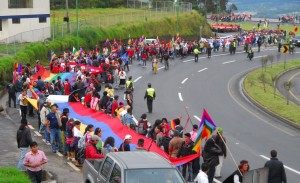 Yesterday, July 1, concluded the indigenous march against the Water Law in Quito. The walk began twelve days ago in El Pangui (Zamora Chinchipe) and ended in the extreme south of the Ecuadorian capital until El Arbolito park, located just two blocks away from the National Assembly.

The crowd marched escorted by the National Police in the Quito streets while waving two giant flags: a multicolored and another blue that said “We are Water”.

One of the complaints of indigenous people is the creation of the Unique Authority of the Water and the subordination of community boards to this new entity.

“We propose a plurinational council where we all are included, those from the towns and the cities, but they did not allow it,” said the Prefect of Zamora Chinchipe Salvador Quishpe.

The leaders installed the Peoples Parliament which will address issues of contention with the Government and will prepare a mandate.

Through a speech, the Ecuarunari President Carlos Perez Guartambel, called the civil disobedience to not comply with the Water Resources Law.