The businessmen recognize the good moment of the economy, but warn that it is the effect of the increase in international prices and the elimination of safeguards. The official figures of economic growth in the third quarter of 2017 confirm the good performance experienced by a large part of the industrial branches of the country, with the exception of oil, mines and, once again, construction. Oil refining leads the list of the 18 segments analyzed by the Central Bank of Ecuador.

Influenced in it that in the third quarter the refineries were at their highest powers, explained Verónica Artola, manager of the Central Bank of Ecuador. Other positive areas are also positive, such as aquaculture and shrimp fishing, trade, and fishing.

In aquaculture and shrimp fishing, the Government indicates that “historical levels of production and exports” have been maintained, especially towards the Asian market. Year-on-year growth in the industry is evident, going from 4.6% in the second quarter to 5.4% in the third quarter.

The same does not happen with fishing that went from 6% to 1.7%. The decrease is due to programmed closures, the Central Bank informed. Bruno Leone, president of the National Chamber of Fisheries, acknowledged that the activity is going through a good time. 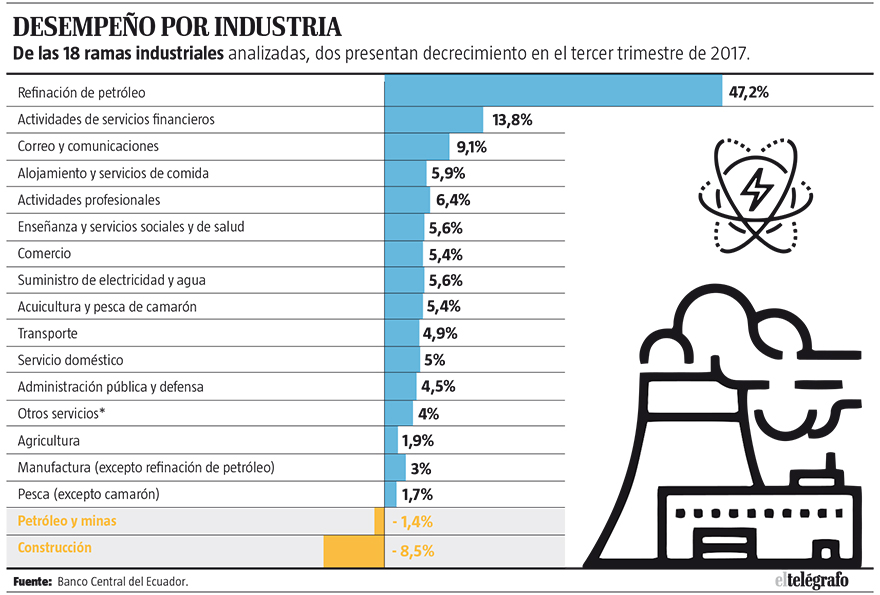 However, Leone clarified, the situation responds to an increase in international prices for certain products, but not to a greater volume of production. With tuna, for example, the price improved by an average of 25% and 30%, due to climatic factors that reduced the international offer. It also favored the commercial agreement with the European Union (EU). Although the current scenario is positive for Ecuador, Leone warned that the issue with costs is something momentary and that no new jobs have been created. “Prices will not always be high,” he said.

To avoid that the industry feels a strong impact when the values are normalized, the official recommended to implement policies to reduce production costs and contracting figures according to the activity. In the commercial branch, things are going well. During 2017 it maintained a constant growth with quarterly returns between 0.6% and 1%. It is good that it happens, said Xavier Patiño, president of the Chamber of Commerce of Cuenca (CCC).

But he indicated that this stage is not due precisely to full commercial development, but is an effect of the elimination of safeguards, which “was a trigger” for growth. Now, Patiño noted that the upward rhythm will slow down the application of the customs control rate to imports and the increase of tariffs to 375 subheadings, announced for this year. “This encourages people to panic and start buying for fear of being taxed more,” Patiño said.

The critical part of the National Accounts is again in construction. The industry has been decreasing for 33 months. Mauricio Cattani, spokesman for the Ecuadorian Association for Construction and Employment, insisted that the main reason for the fall is the Goodwill Law, which since its announcement in 2015 discouraged investments and sales. While business expectations improved slightly with the formalization of the referendum, which proposes to eliminate the rule, Cattani said that as long as there is no certainty about the regulations that will replace the current law, construction will remain stagnant.

For the growth of the economy to be sustainable in the medium and long term, the manager of the Central said that the participation of the private sector is necessary, since maintaining the situation is not only the responsibility of the Government. 1 percent of growth in construction is provided by the Central Bank, through the Casa para Todos plan.

Finance Minister Carlos de la Torre wrote on Twitter that he does not know what affects the economy more, if the fall in the price of oil and the appreciation of the dollar, or “the false economic analysis” (I)