Inhibition was the legal layout for Inheritance Law 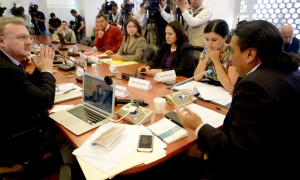 There is no specific provision that establishes the withdrawal of a bill presented to the Assembly. The Committee on Economic Regime found a legal output for the temporary withdrawal of the draft Redistribution of Wealth (Law of inheritance).

“It was the most coherent, most healthy and the only legal exit,” said Ramiro Aguilar (independent), who had declared himself opposed to the law.

Assemblyman Franco Romero (PSC) had asked the commission to debate the bill, since Section 140 of the Constitution states that the president will be able to send the project as a matter of economic urgency and the Assembly will be able to approve, modify or deny it within 30 days. The same section states that if not doing so, the bill would enter through virtue of law. The motion was rejected.