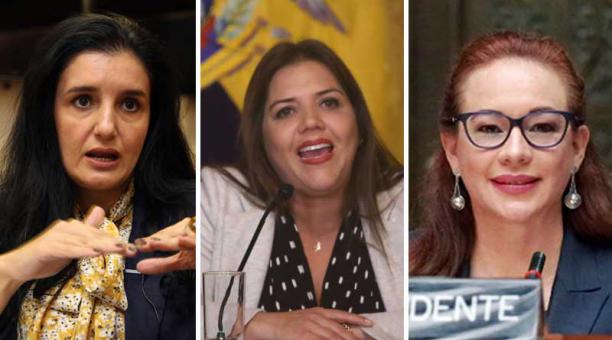 Ecuador will have for the second time in its political history a woman in the Vice Presidency of the Republic. The first one  was Rosalía Arteaga (1997). There are three possible successors of Jorge Glas (who is sentenced in the first instance for illicit association): María Alejandra Vicuña, María Fernanda Espinosa and Rosana Alvarado. They are all part of the Cabinet.

President Lenin Moreno sent Thursday, January 4, 2018, the triple to the National Assembly. The session to occupy the new Second President will be installed on Saturday. 69 positive votes are required, but it will not be easy to obtain them for the Government. The Parliament has 137 legislators. Of these, 74 belong to Alianza País and its allies; and 63 to the opposition. The internal conflict caused the ruling bloc to fracture and now it is divided into morenistas, correístas and those who have not yet taken a position. No one has enough votes to, alone, elect the new Vice President. The Morenistas say that they number at least 46. In the other two sectors they still do not dare to launch numbers. José Serrano, head of the Assembly, convened the Plenary to know the shortlist at 15:15. Just one day before the scheduled appearance of Jorge Glas, before the Supervisory Commission.

This parallel process is due to a political trial requested by the opposition. But it will also depend on what happens in the plenary session on Saturday. The Constitution does not allow the political prosecution of an ex-president, only ex-ministers. Therefore, there are legislators who believe that the process will expire once Glas is replaced.

Other members of the assembly, such as proponent Roberto Gómez (Creo), maintain that the process began while Glas was in office, so he will have to follow his course. Thus, the ruling party in the Legislature will need the votes of the opposition to guarantee the election of the Vice President. Serrano trusts that this will be the case, since the agenda of the day includes the possession of Moreno’s new partner, as the last point. Elizabeth Cabezas, of the morenista faction, considers that the President’s suggestion is that Vicuña be chosen, since it is the first name of the shortlist and has accompanied him “in a complex situation”. The legislator admits that they will need the opposition to achieve it. But he is confident that they will have the votes of the SUMA (9) and the National Integration (BIN, 14) caucus, which brings together the legislative minorities. Although SUMA had a meeting to discuss the issue on Thursday afternoon, its coordinator, Guillermo Celi, said that they “will make viable a path towards democratic institutions”, since the country “needs a Vice President”.

Vilma Andrade, coordinator of the BIN, said that the majority of its members agree to vote for the first of the list. This, to allow Moreno to have the formula mate he proposes. However, he did not guarantee that all the votes would be given that way. While the coordinator of the Christian Socialist bloc, Henry Cucalón, affirmed that they will abstain at the time of the vote. For Cristina Reyes, her partner in the bench, the short list disappoints many Ecuadorians.

The relationship between the PSC and Vicuña has a history. In her periods as legislator, the Vice President in charge was very critical in her interventions with the actions of the party and its leaders, such as Mayor Jaime Nebot. Something similar will happen with Creo, the second political force of the Assembly, which has been the only one that has not participated in the dialogue process with the National Government. The movement, led by former presidential candidate Guillermo Lasso, will not take part in the decision. This was indicated by its coordinator, Roberto Gómez. “The ruling party must choose with their votes the person the President has proposed,” he said.

He added that they will be responsible for proposing the new Vice President and what she does during her tenure. The only ones in the Assembly that oppose the change of the Second President are those that belong to the Correísta faction of AP. For them, the process against Glas has not been the right one. And they do not support the names sent by the Chief Executive. Assemblywoman Marcela Aguiñaga, part of this group, acknowledged that it is the power of President Moreno to send the shortlist. But he warned that for Glas to lose his post, first the verification of the abandonment of the position by the Constitutional Court is required and, later, that the Assembly itself declares it that way. If this is not fulfilled, they will not give their votes, he emphasized.

The Assembly has 30 days to make a decision. If in that term a majority is not achieved by a name, the first of the three will be held as Vice President, as established by the Constitution and the Organic Law of the Legislative Function.

Her political life began in the Alianza Bolivariana Alfarista (ABA) movement, which supported the formation of Alianza País in 2006. She is now an adherent of the Government party. She was elected Assemblywoman for Guayas in the periods 2009-2013 and 2013-2017. She is currently the vice president in charge, but she is also in charge of the Urban Development and Housing portfolio.

She was the first foreign minister of Rafael Correa, in 2007. Between 2008 and 2014, she was the representative of the UN in the United States, Minister of Patrimony and Defense. In 2015 he traveled to Switzerland, Geneva, as permanent representative to the UN. There he strengthened his friendly relationship with President Lenin Moreno, who at that time was a Special Envoy for disability issues. She is currently in charge of the Chancellery.

She was a member of the Constituent Assembly, which drafted the current Constitution, between 2007 and 2008. She has served as a legislator for Azuay for three consecutive periods. She was a member of the Legislation and Supervision Commissions, the Biodiversity and Human Resources Commission and between 2013 and 2017 she was the first Vice-President of the Assembly. She is currently Minister of Justice, Human Rights and Cults. (I)