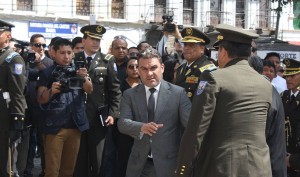 Two public opinion polls for a total of $ 891,000 were hired this year by the Interior Ministry to find out what citizens think about its management.

According to documents of the processes, the first survey was awarded on August 21 and the second two weeks later, on September 9. Both with the same advertising company, Propraxis SA, based in Cuenca.

This contract, not foreseen in the annual procurement plan, was questioned by the Public Procurement Service (Sercop), according to a document of the process.

In this document, the Sercop criticizes the fact that the Interior Ministry demanded specific brands of computers for the contracting companies and stresses that this “limits the participation of bidders and is discriminatory.” It is also recommended to avoid “addressings or damages.”

The second contract with Propraxis SA, for $ 518,000 and for a period of 120 days, seeks to conduct surveys that allow this body to improve its promotional activities and “apply new tools in the dissemination of services of the Interior Ministry.”

It also includes a workshop for five thousand neighborhood leaders in five cities of the country.

Jobs are reduced in a difficult economic environment

Employers in favor of a labor flexibilization