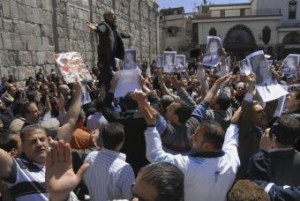 The Syrian army sent reinforcements to the south city of Deraa, were it continue to fire upon its civilians. The next day the violent military suppressions left 25 dead, this action lead the United States to study possible sanctions for Damascus. Abdullah Abazid, a human rights militar informed that the army continues to shoot the civilians.

The Syrian leader maintains his position even after the attacks of last Monday that left 25 people dead. Since March 15, when the demonstrations started, 390 people have died, and 160 perished since the emergency state was approved on April 21.

After these events, France and Italy demanded to the regime of president Bashar al Assad to cease the violent suppressions. Silvio Berlusconia along with Nicolas Sarkozy qualified such actions as unacceptable. Afterwards Sarkozy excluded an intervention to Syria without a resolution made by the Security Council of the UN.

Meanwhile the Venezuelan leader, Hugo Chavez, expressed his support towards Bashar al Assad and also stated that the infiltrated terrorists are responsible for the hostilities.