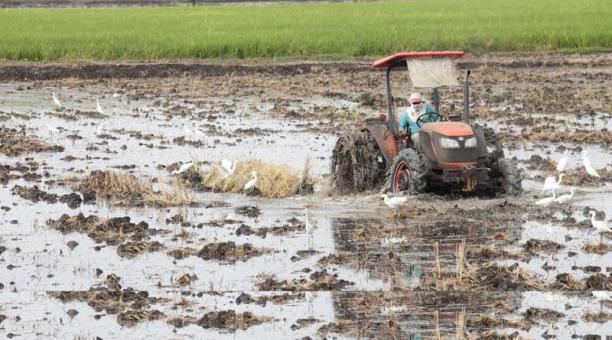 The earth is dry and cracked. The rice growing areas surrounding the Las Cañas site, in the canton of Lomas de Sargentillo, have not yet begun to be planted because the irregular winter altered farmers’ plans.

The economy of the town, with 8,000 inhabitants, depends 80% on the production and marketing of the grass. Normally, by the third week of this month the greenness of the fields is appreciated by the small rice plants. The lack of constant rains is a concern shared by the producers of the enclosure, the canton and the high areas of cantons such as Daule, Pedro Carbo and Santa Lucía, in Guayas; or Montalvo, Ventanas and Babahoyo, in Los Ríos, which account for 95% of Ecuador’s production.

Israel Franco, farmer and member of the group Las Cañas, said that in the town there are 220 hectares that have only been removed to prepare them for planting. However, the works did not continue due to the lack of water, since there are no nearby wells or rivers. In general, the rainy season on the Ecuadorian coast does not begin fully.

According to the National Institute of Meteorology and Hydrology (Inamhi), slight precipitation has occurred this month and occasionally in the interior of the region. The slight cooling in the Pacific Ocean has affected a delay in the season, indicates one of the conclusions of the Committee for the Regional Study of the El Niño Phenomenon.

The Oceanographic Institute of the Navy indicated that January was expected to be relatively dry and deficient. The conditions will normalize in February, which would start the winter as such. Somehow, the moderate rain of January 15th “restored hope” to the farmers of Fluminense. Fernando Gaibor, producer and leader of Babahoyo, said they expected heavy rains between December 25 and 28.

“Without rain the crop is distorted; in the highlands of Los Ríos the sowing did not advance, with the last rain the work was regularized a little, “but it is not enough to reactivate the three rice cantons. In Guayasense roads, such as the Daule-Santa Lucía highway, planting is slow.

There are places where the earth is newly prepared, which is usually done at the beginning of the year. Julio Carchi, vice president of the Board of Users America Lomas, Daule, said that some sectors of the canton do not go through that problem, thanks to irrigation systems in areas near the cantonal head and the Daule River. The fields are green and the workers are engaged in agricultural activity. However, he said that there are affected rice fields, because they are far from the tributaries, several of them located in the Limonal or Juan Bautista Aguirre parishes.

The Ecuadorian Rice Industrialists Corporation estimates that the delay in planting involves 20% of the 148,000 hectares that are expected to be cultivated and harvested during the first quarter of this year. That is, 29 600 hectares on the Coast. In the second quarter, the rest of the hectares will be planted, since the country devotes about 360,000 hectares to this product of mass consumption.

“If in February the rains are regularized, those who began with arrears would not leave with their harvest in April or May, but it would be from June, that is, sales would be delayed a little,” explained Tulio Reyes, executive director of that industrial guild. Carchi commented that this situation -which affects the producers of the upper zone of the Coast- adds to the marketing problem that has been going on since 2017.

The official price of the 200-pound rice paddle is not respected, which is USD 35.50. “The problem is that they are paying less than $ 30 for the 210-pound bag. And in the piladoras the product does not come out, they have stored the product and that makes the payments are delayed up to 60 days “, said the farmer Gregorio Salas. He is from the Guachinchal site, where more than 300 inhabitants depend directly on the grass. The winter harvest does not generate great expectations, due to the delay in plantings and the low price. The mayor of Daule, Pedro Salazar, believes that there will be problems in his canton, since 80% of local economic activity moves around rice. (I)

They broadcast videos of supporters of correa beating their critics