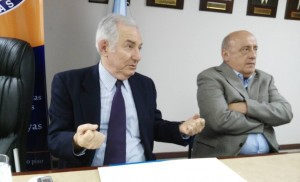 Isaac Cohen is visiting the country to give lectures at the Ecotec, Catolica and Laica Vicente Rocafuerte universities. Yesterday he met with the prefect of Guayas, Jimmy Jairala, and the mayor of Guayaquil, Jaime Nebot. The finance and economics commentator for CNN in Spanish analyzed the global economic outlook, including Ecuador.

How you see Ecuador’s economy from Washington?

Until they began to lower prices of oil and raw materials, the economy of Ecuador looked great, we are now entering lean times … Ecuador comes from a period of prosperity in which benefits were fairly distributed and now the country enters a period of adjustment. The International Monetary Fund (IMF), that has returned to the country last month, has begun to analyze the situation and how that should be fulfill (the adjustment); then, there is great interest from Washington.

Not necessarily concern because Ecuador’s economy has positive elements; for example, the dollar gives the country a guarantee of low inflation and stability.

But President Rafael Correa has repeatedly said that having a dollarized economy is a straitjacket … All economic measures have a cost and a benefit and, indeed, having the dollar as currency restricts the discretion of monetary policy, Ecuador can not devalue the dollar (…) but the devaluations leads to inflation, then the adjustment must be done in a different way.

The government has to fill fiscal pit somehow, one possibility is to cut spending, the other is to increase the income, but if you increase taxes when the economy is very repressed, this may deepen the fall.

Alleged terrorist of the France attacks would have been in Ecuador