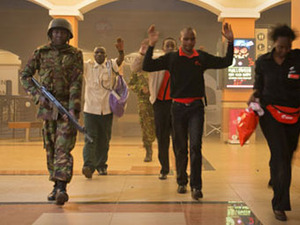 On Sunday, Kenya reported that security forces controlled much of the shopping center Nairobi in which 68 people died in an attack carried out by the Somali group Al Shabaab. The militants appeared to have hostages as the assault came on the third day on Monday .

After the exchange of fire in the Westgate mall during midday last Saturday, the situation escalated and a military spokesman said most of the hostages were released shopping complex.

However, there was no mention of the death or capture of the militants, but said that the commanders expect to complete the operation “very, very soon.”

Although the information received, is not clear the situation of the detainees, which according to reports would reach a dozen. Nor is there information that armed militants are holed up in a supermarket shopping center.

For his part, Al Shabaab announced that its fighters request that Kenya withdraw its troops from the Horn of Africa, where they have put the group linked to Al Qaeda on the defensive in recent years.

Meanwhile the president of Kenya, Uhuru Kenyatta promised to be firm against Somali insurgents, but was cautious in discussing the result of the crisis, saying that “the chances for the attackers to be neutralized are as good as we could expect.”