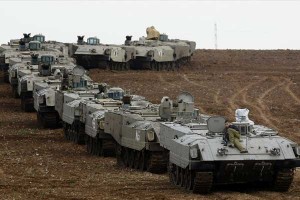 Israeli officials permitted Egypt to move several hundred troops in the Sinai Peninsula for the first time since the peace treaty of 1979.  With the street protests threatening the Egyptian regime, the unnamed officials allowed the Egyptian army to deploy two battalions, over 800 soldiers, into Sinai.

Civil unrest in Egypt has rapidly spread, and their neighboring country is concern with the stability of their southern neighbor, fearing that the Palestinian could smuggle weapons into Gaza Strip. Meanwhile the Prime Minister, Benjamin Netanyahu prohibited the government to discuss the situation in Egypt.

Thousands of Egyptians defied this Monday the curfew in Cairo to demand the resignation of president Hosni Mubarak. This marks the seventh day in a row of heavy manifestations against the regime. Authorities established a curfew this Monday that started at 15:00, however the protesters did not obey it.