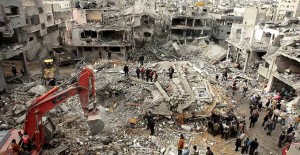 The confrontation between the Israeli army and the Hamas and other Palestinian armed groups continued on Saturday morning in the Gaza Strip, killing more than 110 Palestinians in five days. Rocket launches against Israel from the enclave have not being ceased. Prime Minister Benjamin Netanyahu said Israel will resist any international interference facing of a ceasefire. “No international pressure will stop us from hitting the terrorists who attack us”, Netanyahu said during a news conference at the Defense Ministry in Tel Aviv. In an earlier telephone interview with Netanyahu, U.S. President Barack Obama expressed his fear of an escalating violence and offered his mediation to restore calm. United States said it was willing to “facilitate a cessation of hostilities, including a return to the ceasefire agreement of November 2012.” The General Secretary of the ONU, Ban Ki-moon called on Thursday a ceasefire in an emergency meeting of the Security Council, however, Netanyahu and former Prime Minister of Hamas in Gaza Ismail Haniyeh, excluded by a time a ceasefire.