Isspol case: Former Decevale Operations Manager confessed to having received $ 3.1 million in bribes from Jorge Chérrez and an apartment in Miami

Luis Álvarez Villamar, Decevale’s former Operations Manager, confessed to having received $ 3.1 million in bribes from accounts controlled by Jorge Chérrez Miño (of the IBCorp Group), as well as a department in Miami. The confession is part of an agreement reached with US prosecutors in the case that is related to the investments of the National Police Security Institute (Isspol). 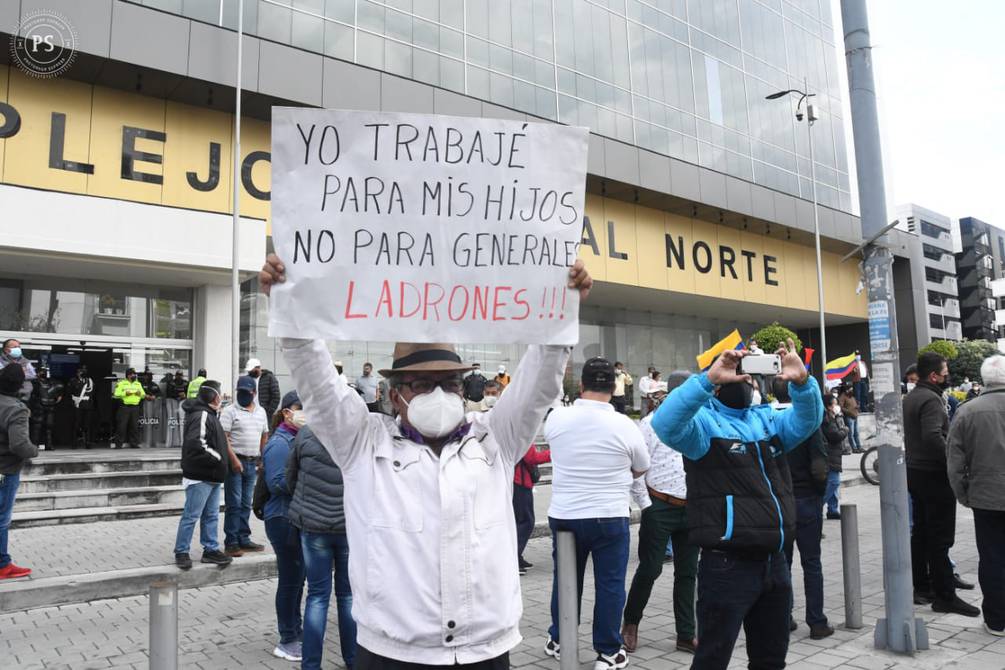 Members of passive duty police organizations held a sit-in outside the North Judicial Complex, in Quito, to demand justice in the Isspol case on June 9.

The agreement, signed on May 18, was made public a few days ago in the Miami courts. Álvarez accepted that he received bribes between 2014 and 2019 paid by Chérrez Miño to, among other things, “allow the companies controlled by Chérrez to act as custodian of Isspol’s investments,” whose custodian was the Centralized Deposit of Compensation and Liquidation of Valores SA , Decevale.

That allowed “Chérrez full custody and control over these investments,” is indicated in the probative information that supports the confession of Álvarez, accused of the crime of money laundering. Across 22 financial transactions, bribes exceeded $ 10,000 that were made through US bank accounts in Florida, the document added.

In that four-page document, which the prosecutors highlighted is only a summary, it was indicated that at the time these payments occurred “Chérrez was immersed in a bribery scheme in which Chérrez paid bribes to Isspol officials in exchange for that they use their positions to help Chérrez and the companies he controlled to obtain and retain investment business with Isspol ”.

Álvarez knew that the bribery payments were derived, partially or completely, from the business that Chérrez obtained from Isspol through bribes, says the probative information signed by Álvarez himself.

As stated in the document, thanks to the bribes Álvarez reached agreements, in the name of Decevale, with Chérrez giving him advantages. “Specifically, these agreements provided that Isspol investments handled by Chérrez and his companies be deposited directly with Chérrez’s company in Panama, in a place of a custodian without conflicts of interest approved” by Decevale.

“That allowed Chérrez to act both as an investment advisor and as a custodian of Isspol’s assets, which gave Chérrez the ability to invest and use Isspol’s investments without proper oversight” from Decevale, the document said.

The Prosecutor’s Office is continuing some investigations in Ecuador and has filed charges against former Isspol and Decevale officials. At the end of June, he carried out raids at Decevale’s offices. (I)

The United States authorities began to investigate the case of Isspol’s investments with Jorge Chérrez’s companies since the end of last year. These exceed $ 700 million with the companies IBCorp Investments and Business Group (IBCorp) and Ecuador High Yield Bond Fund (Ehybf) between 2016 and 2020 . These investments were allegedly guarded by Decevale, the private company that acts as custodian in the stock market. However, the Depository retracted ensuring that it did not have them in custody.

Proceedings were initiated in the Florida courts against Jorge Chérrez, who is now in Mexico , and against John Luzuriaga Aguinaga, former director of Risks at Isspol. (I)