She went to get some change for some cigarettes, she talked to the door man, 12 hours later she was found dead in her hotel room, she was still holding some coins in her hands. A heroin overdose killed the flower-power queen Janis 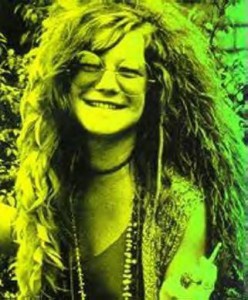 Joplin 40 years ago on October 4th.

The state forensic claimed her death was an accident, apparently the heroin that the 27-year-old singer had gotten from the dealer wasn’t pure and when she combined it with her favorite drink, Southern Comfort, it collapsed her heart.

“I prefer ten years of superhypermost than turning 70 and spend my days sitting in front of the TV. You have to live right now, why to wait?” she used to say.

Janis was considered beatnik in her natal Port Arthur, Texas, even when nobody had a clear idea of what that was.

She expressed her soul through her songs, sometimes she didn’t even sing, she screamed. In 1967, she did a gig in Monterrey at a Pop Festival, that’s when her successful career as a musician started. After that, it was Woodstock time and a tour around Europe came along too. She was often seen holding a bottle of whisky on one hand and a microphone on the other one.

She died in 1979, music legends Jimmy Hendrix and Jim Morrison also died later that year. Definitely it was the end of an era.