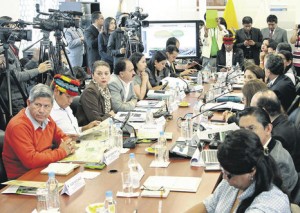 Oswaldo Madrid, Petroamazonas Manager, said that they will first exploit Tiputini and Tambococha, where the oil company has currently an environmental license for intervention. In the future Petroamazonas has plans to make studies on the Ishpingo field to request permission for exploitation.

On Thursday, the Environment Minister Lorena Tapia signed the environmental license for the operation of the two areas, which form part of the ITT Block.

Tapia said that Ishpingo was left out of the environmental permit to preserve the intangible area of ​​the park. However, Petroamazonas have not asked the license to develop that field.

But this does not slow down the state company to advance southward on the exploitation. According to Madrid, the project includes the Ishpingo and it will be developed holistically.

In total, the block 43 has reserves of 919 million barrels of heavy oil. Of these, 460 million are in Tiputini and Tambococha, and 456 million in the Ishpingo.

It is expected that the three fields reach a plateau production of 180,000 barrels of oil over the next six or seven years, which would mean an additional 32 % of oil production according to the current records of the country.

With the environmental license granted, Madrid said Petroamazonas will start with everything needed to drill the first wells. According to Madrid, the first barrels block will be in early 2016.

President Rafael Correa has said that this project will only affect one per thousand of the Yasuni National Park.

Salt, sugar and fat tags can go back of the package