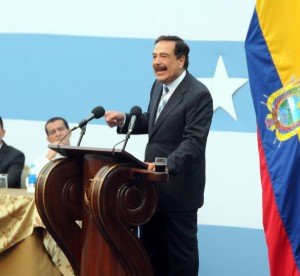 During a 35-minute speech, which took place at the Plaza de la Integration, in the southern part of the Malecón Simón Bolívar, Mayor Jaime Nebot yesterday called to defend democracy and to prevent its death, letting to a narrower field of freedom.

“This country, within the Constitution and within the law, must be rebellious when defending its freedom,” said Nebot during the formal session for all the 479 years of the founding process of Guayaquil, which was attended by the Mayor of Quito, Mauricio Rodas.

Before Nebot’s speech, Rodas honored the Hall of Guayaquil and in a brief speech reiterated his willingness to strengthen ties between the two cities.