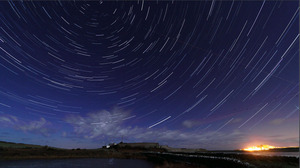 Between 120 and 200 meteors per hour were observed in the sky last Friday. This astronomical phenomenon is called Starfall and the latter is called the Quadrantids.

It takes place each year at the beginning of January. Usually its activity tends to range between 1 and 5 this month, but its peak was recorded on january 3.

This is because Earth, during his trip, orbits around the Sun and crosses areas of rubble left by comets. The Speed, 43 000 to 260 000 kilometres per hour, over the clash with the atmosphere light produce a shine and a light trail similar to a star.

The number of meteors that can be seen depends on the darkness of the sky, cloud cover and height which is the radiant above the horizon. At the same time, they also vary with the years.

In addition, this month will see a new rain, caused by the remnants of the Comet Ison, which failed to survive his encounter with the Sun in November 2013. On january 9, expected that the remains of the Comet are intercepted by the Earth and shooting stars, originated rubbing with the Earth’s atmosphere.