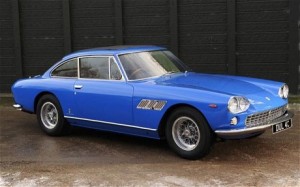 In 1965, former Beatle John Lennon got his driver’s license, such news were all over the British media and provoked the appearance of several luxury cars sellers to surround Lennon’s home in Kenwood in order to offer him deals in cars, informed his biographer, Phillip Norman. A Ferrari 330 GT caught Lennon’s eye, he paid 2,000 pounds for it at that time.

British auction house Bonhams will give the car to the highest bidder on Feb. 5 in Paris. The price of the blue Ferrari, which will also be exhibited at the upcoming motor show in the Grand Palais of the French city, ranges between 120,000 and 170,000 euros (154,848 to 219,330 dollars).

After two months of acquiring the Ferrari, the singer bought a Rolls-Royce Phantom limousine V, which he decorated with psychedelic colors, just like the Mini he would acquire later.