Jorge Glas leaves the public sector after a vertiginous ascent 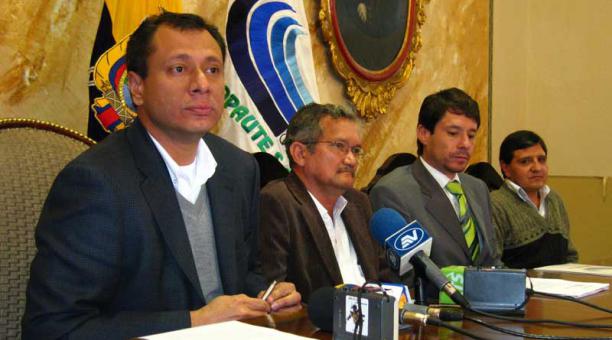 Jorge Glas Espinel faced two unprecedented situations as Vice President: he held the position without functions and was sentenced to prison for six years. Now, his days as the Second President ended.

But the departure of Glas does not respond to a judicial or political process against him but rather to an administrative one. On Tuesday, January 2, 2018, the three months of temporary absence (which coincides with the time he is detained) were completed and the definitive absence is in effect. Thus, as of today, President Lenin Moreno is authorized to begin a process to select a replacement. The new Vice President will accompany him until 2021. An expanded Cabinet will be installed at the Palacio de Carondelet today and it is likely that the names of Glas replacement will be known.

On Tuesday, a source close to the Executive said that a list of 15 people was made. Moreno will have the last word to choose the triple that will be sent to the National Assembly.

The relationship with Correa

In his youth, Jorge Glas started two relationships that would define his political life and his current situation. The first, his friendship with Rafael Correa and, the second, the professional bond with his uncle Ricardo Rivera. Thanks to Correa, the former Second President opened his time in the public sector and in politics, in 2007.

His first position, at the request of Correa, was that of the Chairman of the Board of the then Solidarity Fund, where he was in charge of the merger of the telephone companies Andinatel and Pacifictel. His brother Heriberto claimed, in January 2013, that Glas did not enter the Government as a political fee, but for his professional capacity. Since 2007 he climbed several positions. He passed through the National Telecommunications Corporation (CNT), was Minister of Telecommunications and later Minister Coordinator of Strategic Sectors. Six years after entering the public sector, he ran for Vice President, with Correa himself.

He held the position for the first time in May 2013. His relationship with the former president began three decades earlier: both were part of the newly created group of 17 boyscouts, at the Colegio Cristóbal Colón, in Guayaquil. Glas as a student and patrol member, Correa as a teacher and head of the scouts. Later, although the Vice President wanted to be a doctor, due to financial limitations of his family, he joined the Escuela Politécnica del Litoral (Espol). He graduated in Electrical and Electronic Engineering in 1996. But he graduated 12 years later, in 2008.

Obtaining that title was questioned in 2012. Two opposition legislators accused him of plagiarism in his thesis. And in April 2013, the Espol decided that Glas should publicly apologize to the institution for not having made the appropriate references in his thesis. But, at the same time, he ratified the validity of his title. In his university days, Glas would also start a professional relationship with his uncle, owner of Satelital TV, a firm of which he became Manager.

That link is now the cornerstone in the sentence against him for illicit association and another ongoing investigation for alleged bribery, for the Odebrecht corruption case. When the former Second President was in his final years of studies he started working with Rivera. There he maintained an opinion program, in which Correa used to be one of the most invited analysts. Years later, in 2009, for the first time came the light of that more than familiar relationship, which linked Rivera with state business, in which Glas was also involved. With Satellite TV, the satellite antenna services were contracted for Correa’s Saturday links. Then, in 2015, his name jumped again, when the then legislator Andrés Páez denounced millionaire transactions on behalf of Rivera, from Hong Kong. These transactions were linked to the case of Tomislav Topic, in 2016. Along with Rivera, Topic is investigated for alleged money laundering in the telecommunications sector.

The complaints against Glas have also appeared in other sectors, such as electricity and oil. However, at the time and together with his uncle, the only sentence remains for the Odebrecht case. This came last month, just six months after the start of his second term, now together with Lenin Moreno. But between the denunciations of corruption and the political agenda of the Head of State, the distance between Glas and Moreno was evident and proved insurmountable. On August 3, 2017, the Chief Executive withdrew his functions and now defines the triple for his replacement. (I)