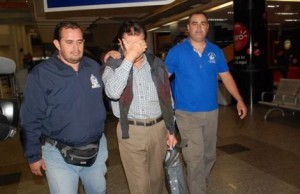 Jorge Glas Viejó, father of Vice President of Ecuador, arrived yesterday to Guayaquil on a flight that came from Asuncion, Paraguay. Glas Viejó was charged for the alleged rape case of a 13 year old girl who got pregnant .

Glas Viejó was sacked from Asuncion on Tuesday night, hours after being arrested with a German passport with his name, which had an entry stamp in October 2011. The police of that country found that he had not complied with the immigration process and was required by the Ecuadorian courts.

Because there is no an extradition treaty with Ecuador, the Paraguayan government decided to expel him for the faster administrative process.

Glas Viejó arrived to the airport of Guayaquil `José Joaquín de Olmedo´ and was escorted by Interpol members, who delivered him to the local police.

In March of last year, the Prosecutor issued an indictment against Glas, so he was called to trial. Now, the raffle of the case is pending, which should be issued by the Criminal Court of Guayas.