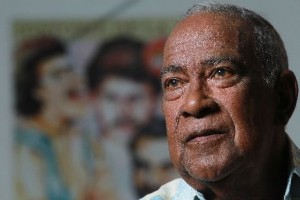 The Salsa legend, Cheo Feliciano, died today in the early morning due to a car accident in which the Jaguar he was driving hit a post

The Salsa singer Jose Cheo Feliciano, died this morning in a car accident in the town of Cupeyin the suburbs of San Juan, Puerto Rico. Cheo Feliciano, 78, was on his way home at about 4:13 am (8:13 GMT), when the Jaguar he was driving hit a cement post, which caused his instantaneous death.

The Police Transit Coordinator, Jorge Hernández Peña, confirmed in the scene of the events that the artist was not wearing a seat belt when driving. The singer of “Amada mia” and “Juan Albañil” was a leading proponent in the fight against drugs, because he was addicted to heroin while living in New York, where he traveled to pursue his career.