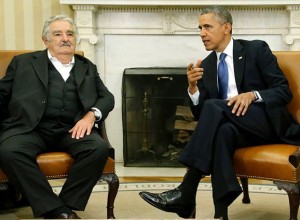 The President of Uruguay, José Mujica, arrived today at the White House to meet  his U.S. counterpart, Barack Obama, in what constitutes the main event of his official visit to Washington this week.

Following a private meeting between Mujica and Obama in the Oval Office, the meeting will be extended to teams of both leaders, including the U.S. Secretary of State, John Kerry.

According to experts, Obama will seek  to specify with Mujica details on the transfer of various Guantanamo prisoners to Uruguay.

Trade ties and cooperation in science and education will be also addressed.

The Uruguayan President is traveling with nearly half of his ministers and other senior government officials, and will remain in Washington until Thursday.