Judge José Luis Alarcón Bowen is in the eye of the storm, together with his colleague Mary Quintero Prado. Both declared the innocence of 18 defendants for the trafficking of 20 tons of cocaine, with the saved vote of judge Carlos Fuentes. 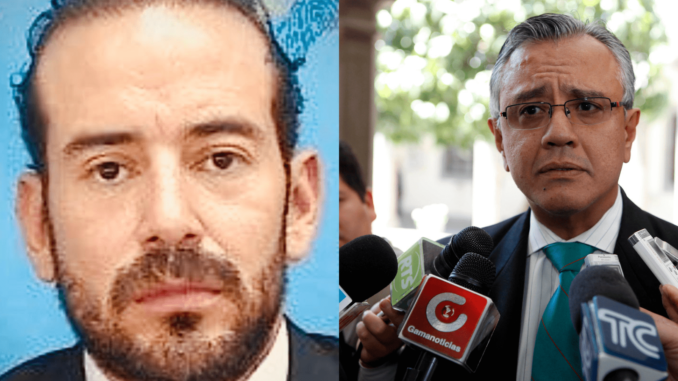 Alarcón was a legal advisor to the Presidency of the Republic in two terms, during correísmo, and secretary of the Prosecutor’s Office in 2010. Until 2017 he was married to Estefanía Grunauer, current candidate for the Quito Council on Jorge Yunda ‘s list , with Pachakutik. She sued him for alimony.​​​​​​

The  transnational investigation  that lasted a year and a half was, for the moment, in ruins. The criminal structure shipped  cocaine  by the ton from Manta by sea to Central and North America in alliance with the  Sinaloa cartel .

The  18 detainees  have just been declared  innocent  by two of the three members of the court that heard the case. One of the votes in favor of the defendants corresponds to Judge  José Luis Alarcón Bowen . The judge accredits a career as an official of the  Presidency  and the  Prosecutor ‘s Office , during the  government of Rafael Correa .

The legislator and president of the Oversight Commission of the National Assembly indicated on Twitter:

“José Luis Alarcon, one of the judges who acquitted 18 accused of drug trafficking, was legal adviser with Alexis Mera, in the Presidency of the Republic, during the Rafael Correra regime, drug judges, drug lawyers, drug politicians. Extradition YES!”

The review of his legal record reveals that Alarcón Bowen was the husband of Estefanía Grunauer , current candidate for the Quito Council on Jorge Yunda’s list, with Pachakutik. She sued him for the payment of alimony in 2017, arguing that since she was pregnant, he did not provide her with financial resources for her maintenance.

Grunauer was very close to correísmo and as of 2019 she became a close collaborator of Yunda in the Mayor’s Office of Quito. She was a supervisor of the Metropolitan Control Agency, until January 2021, when she left office. Her name also appears in the chats of the cell phone seized from Yunda’s son, Sebastián, today a fugitive, as a person of great confidence to Christian Hernández, nephew of the then Mayor.

Judge Alarcón also registers legal proceedings for a crash with overturning and death, in 2011, and three traffic violations.

Between 2010 and 2022, Alarcón held positions in the Prosecutor’s Office, the Presidency of the Republic and the Judiciary.

In 2010, Alarcón Bowen was Secretary of the Prosecutor’s Office. By 2014, he was already acting as   legal  adviser to the Presidency of the Republic, in the second term of Rafael Correa in power . A distributive of the time shows him as advisor 2 in the  General Legal Secretariat , which at that time was led by  Alexis Mera, today sentenced and imprisoned for the Bribery case.

In 2015 and 2016 he tried his luck in Justice: he was a judge in the Manabí criminal guarantees court. But in 2016 he returned to advise the Presidency of the Republic, in the Legal Secretariat. And two years later he returned as a judge to the courts in Manabí.

As a judge of criminal guarantees, Alarcón Bowen was a speaker at the hearing that resolved the state of innocence of 18 accused of participating in supply and logistics to vessels dedicated to the shipment of drugs.

The hearing lasted 22 days. According to sources from the Prosecutor’s Office, interviewed for this report, 35 testimonies were given, the recording of the anticipated testimony of a US agent who participated in the investigations was reproduced; three international criminal assists were introduced. An analyst also explained that two of the main parties involved moved, separately, more than a million dollars between 2018 and 2020. The probative evidence also included all the computer skills, which include intercepted messages on satellite phones. Coordinates are mentioned in codes   for the meeting of the ships on the high seas.

Roasted guinea pig, humitas… Ecuadorians send to migrants in the US