Katy Perry is the world cover of Cosmopolitan 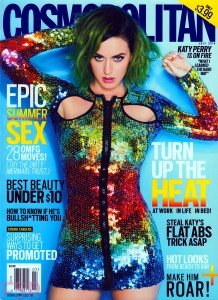 According to eonline.com website, singer Katy Perry will be the first celebrity to show up on the cover of Cosmopolitan worldwide. Although the singer of `Wide Awake´ has appeared in the U.S. edition of the magazine, in July she will appear in the 62 editions of the publication.

Joanna Coles, editor in chief of Cosmopolitan, found that “The music of Katy and her attitude have a universal appeal for all women around the world,” as the singer transcends international barriers and is a global icon of the magazine.