Keira Knightley will sing in her new role 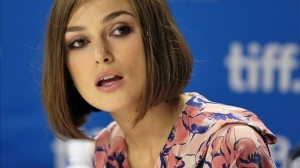 The London-born actress Keira Knightly, even though the music is not her thing, will have to sing in her new film “Begin Again”. “I was tired of doing things like Anna Karenina with those dresses … and I wanted to make a film to convey a message of hope, it was something that had none of the films I made during the preceding five years,” Knightley said in statements on this new project.

The film is based on the story of a girl (Keira Knightley) who moves to New York with her ​​boyfriend (Adam Levine) , so that he becomes a music star, when he does get the fame, he leaves her, then a producer with bad luck (Mark Ruffalo), rescues her, trusting in her talent.