Kerry calls US-China relationship as the “most important” 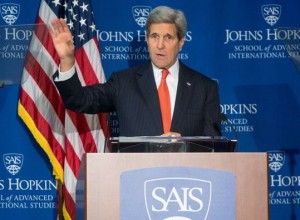 The relationship between the US and China is the “most important” of today’s world, said on Tuesday the US Secretary of State, John Kerry, before a trip to Beijing that will take place this week.

The chief of the US diplomat estimated that the linkages between the two major world powers “will define the the XXI century” and expressed his strong commitment to strengthen the “cooperation” between the two.

Kerry stated during a speech at a university in Washington that the “relationship between China and the United States was the most important in the world of today” and noted that the two giants add “one third” of the planet’s economy.

It is for this reason the two countries should seek “the chance to implement a constructive relationship around a range of issues, from climate change to global trade,” said Kerry.

The official reiterated that the now famous diplomat “rebalance” of Washington to the Asia-Pacific region “is not a strategic goal directed against a country,” in this case China, which accused the US of challenging its regional influence.

Pacific Alliance and Mercosur talk about a possible integration