KISS will perform for the first time in Ecuador 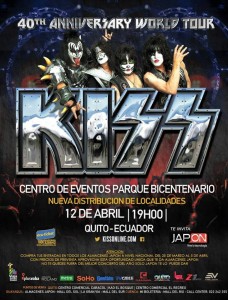 The legendary rock band will be perform on April 12 at the Bicentenario Park in Quito.

The legendary metal rock band, KISS, will perform for the very first time in Ecuador, on April 12th at 19:00 at the Bicentenario Park in Quito, confirmed TEAM Producciones, the company that organizes this event.

This show is part of the 40th Anniversary World Tour, that KISS will offer in South America, which will begin on April 10 in Bogota, Colombia, and will cover Chile, Argentina, Uruguay and Brazil.

The band, famous worldwide for its distinctive makeup and costumes, was formed in its beginnings in January 1973, in New York, by Paul Stanley and Gene Simmons (cofounders), then Ace Frehley and Peter Criss would join. Currently, Stanley and Simmons have the rights of image of the band, and Tommy Thayer and Eric Singer take the place of Frehley and Criss.

On the website ecutickets.ec you can get more information about the tickets purchase and points of sale nationwide. The prices of the tickets to the concert are: Kissbox $ 220, Preference $ 115 and Vip $ 60.