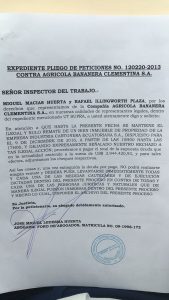 To prevent contagion from one company to another, the Agrícola Bananera Clementina company yesterday paid the $ 3.9 million required by the Labor Inspectorate of Babahoyo, and thus the embargo process against the Ecuadorian Carton Industry was prevented, which, as reported yesterday, was facing an imminent judicial process. The general manager of the company, Leonardo Noboa, confirmed yesterday at a press conference that the payment had been made at four p.m. to interrupt the coercion process.
The Ministry of Labor had ordered the seizure of a property of the cardboard company to force the Noboa Group to cover pending values, for eviction and retirement, after 1,853 workers left La Clementina when it was seized in 2013 to cover the debts the Noboa group had with the Treasury and then exceeded 100 million dollars.
So far, Clementina had argued that the $ 3.9 million the Labor Ministry ordered to pay to its former employees was an “illegitimate” debt. Now, while considering that there is no legal basis for such an obligation, the banana company paid $ 3.9 million to avoid further harm to the companies of the Noboa group, owned by the presidential hopeful Alvaro Noboa.

In fact, the general manager of the company said that the group is going to file the corresponding legal actions, so that the State repairs the damage it has done to the companies of the Noboa conglomerate. “For a debt of 3.9 million more than 50 companies of the group have been affected throughout this time,” said Leonardo Noboa. Now, they only hope that the company’s auction and the precautionary measures are already lifted.