Lack of explosives affects mining and other activities

The temporary suspension of activities at the company Explocen, the only firm that produces explosives on a national scale, limited the operations of the mining industry. This sector uses these inputs to extract gold, copper, cement and other materials. 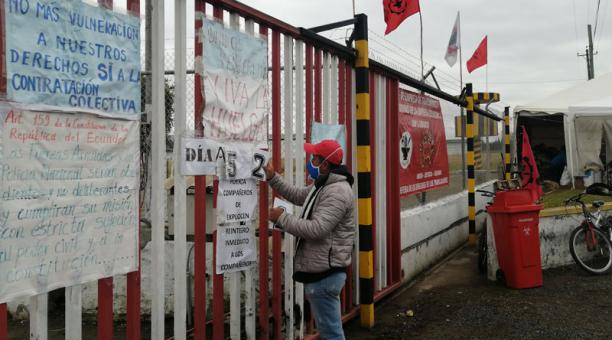 Lack of explosives affects mining and other activities

However, since July 13, activities in this factory, located in the province of Cotopaxi, have been suspended , due to the fact that a group of workers took over the facilities.

This fact has affected the provision of ammunition for the different clients that Explocen has, said Byron Vizcaíno , manager of the firm.

This detonating material is acquired, among others, for the development of large-scale mining projects such as Fruta del Norte and Mirador.

But it is also used in small and artisanal mining , in cement companies, quarries, oil companies and in civil engineering works ( roads , hydroelectric plants) .

The 60% of the market of explosives covered by EXPLOCEN , whose shareholders to the Social Security Institute of the Armed Forces (ISSFA) and Austin Powder.

The rest is done through two importing companies, which bring these supplies from Peru, Bolivia and Spain, said Rómulo Salazar, Import manager of the Explominec company .

The import process takes around three months, due to the characteristics of these products. Salazar commented that, in the long run, the situation that Explocen is going through could lead to shortages. And this, in turn, would affect the companies that use this detonating material. “Currently, the ‘stock’ of this material is scarce.”

Lundin Gold , the company that is in charge of Fruta del Norte, in a letter addressed to President Lenín Moreno on August 27, to which this newspaper had access, points out that due to the strike carried out by a group of Explocen workers , this company has not complied with the timely delivery of the ammunition used in the underground mine and in the quarry.

In mining, the explosives are used in a controlled manner to build the tunnels of access to the mine or to loosen the rock and extract minerals. These are key processes in the mining, referred Henry Troy, former Minister of Mines.

Lundin Gold warns that, if the situation at Explocen is not resolved , this measure will have “significant” impacts on Fruta del Norte’s gold production and export . And he added that this in turn will affect the local and national economy .

For this reason, they even request authorization for Lundin Gold or one of its local suppliers to accelerate the importation of explosives.
For the importation of these products, considered sensitive, the authorization of the Ministry of Defense , Firefighters, and other documents
are required, among others .
Holcim, another of Explocen’s clients , chose to unilaterally terminate the contract with this firm on August 18, because – according to the cement company – the delays or lack of delivery of ammunition has caused a delay in its operations and has forced to look for other providers of the input.

Explocen estimates that this year there will be economic losses. In addition, Vizcaíno considers that if an agreement is not reached with the workers, the company will lose ground to the competition and the image of this factory, which has 43 years of experience , will be affected . “We are negotiating to reach an agreement.”

The workers , who carry out this strike, are at the entrance of the factory, the parking lot , the gatehouse and in two administrative offices. There, they set up a tent that serves as a bedroom and kitchen. They improvised in the garden a meeting area and a dining room.

According to Wilson Ponce, a worker, the protest began after the separation of five workers, at the end of May. He assures that they would have received compensation of USD 1,200 , after working 25 years at the firm.

This caused discontent of the staff, before this the Company Committee of Workers of EXPLOCEN paralyzed the activities of the company.

This measure continues despite the fact that the Ministry of Labor issued two resolutions at the end of July indicating the nullity of the strike. The Explocen Workers ‘Company Committee demands the signing of a collective contract , job stability and respect for the workers’ years of seniority.