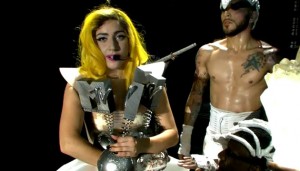 Eva Longoria was chosen to host this year’s MTV Europe Music Awards in Madrid, the ceremony was broadcasted live worldwide.

Shakira, who won the Free your mind award by her support to Colombian and South African children education, opened the presentation with her hit song Waka Waka.

Lady Gaga became the winner of the night, she got 3 awards—including best artist of the year— in the ceremony that was celebrated in Madrid this Sunday.

There were more musical genders besides pop, Paramore was chosen as the “best alternative group” and rapper Eminem got the best hip hop artist award.

Bon Jovi received the Honor MTV Award because of his 25 years of musical career and Ke$ha won the “Revelation of the year” award.

Justin Bieber, 16,  received the artist of the year award as well as the iconic Lady Gaga; who won 8 awards in this year’s MTV Music Awards  in Los Angeles.

DiCaprio Will Play a Psychopath